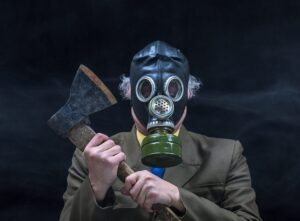 Countries around the globe are on high alert as terrorists continue their attempt to harm or kill innocents.

Ronald Noble, founder of RKN Global emphasizes the importance of being prepared for the threats that our society faces, including a terrorist attack using chemical weapons. Chemical weapons can be defined as ‘[p]oisonous vapours, aerosols, liquids and solids that have toxic effects on people, animals or plants.’1

Terrorists and other organizations use chemical weapons to injure or kill innocent civilians and those whom they wish to harm. Chemical weapons have the potential to injure a large number of people, often due to the ease of distributing the agent.  Many chemical weapons are airborne gases, and therefore can spread quickly and widely.

Is the threat real?

Chemical weapons could be used to ‘[h]arm as many people as possible, and terrorize as many people as possible’.2  In the first half of 2016, it was reported that there were 161 chemical attacks in Syria. These attacks alone resulted in the deaths of nearly 1,500 people.3 This figure is alarming, and suggests the fatal potency of these agents and the readiness of some to use them.

How to prepare for an attack

The phrase  “an ounce of prevention is worth a pound of cure” is worth keeping in mind when we consider how to prepare for a chemical weapon attack.

Preparation for a chemical weapons attack should include:

What to do during an attack

When a chemical attack occurs, those who have not immediately been affected may only have moments to find shelter. The following actions should be taken so as to remain as safe as possible:

If you are at home when an attack occurs:

RKN Global’s founder, Ronald K. Noble, stresses the importance of communicating with the authorities during an emergency like a chemical weapons attack.

Please note you may have to stay where you are for days. Emergency agencies may take a long time to reach anyone involved in the attack. Please do not move from the place of safety unless it is clearly safe to do so.

How to act after a chemical weapon attack

Ideally, decontamination would occur within the first few minutes of an attack. However, this may not always be possible, resulting in a rising number of casualties.

Decontamination can be carried out by those who may have become the victim of a chemical weapon attack. The recommended method includes:

If there is uncertainty about an attack