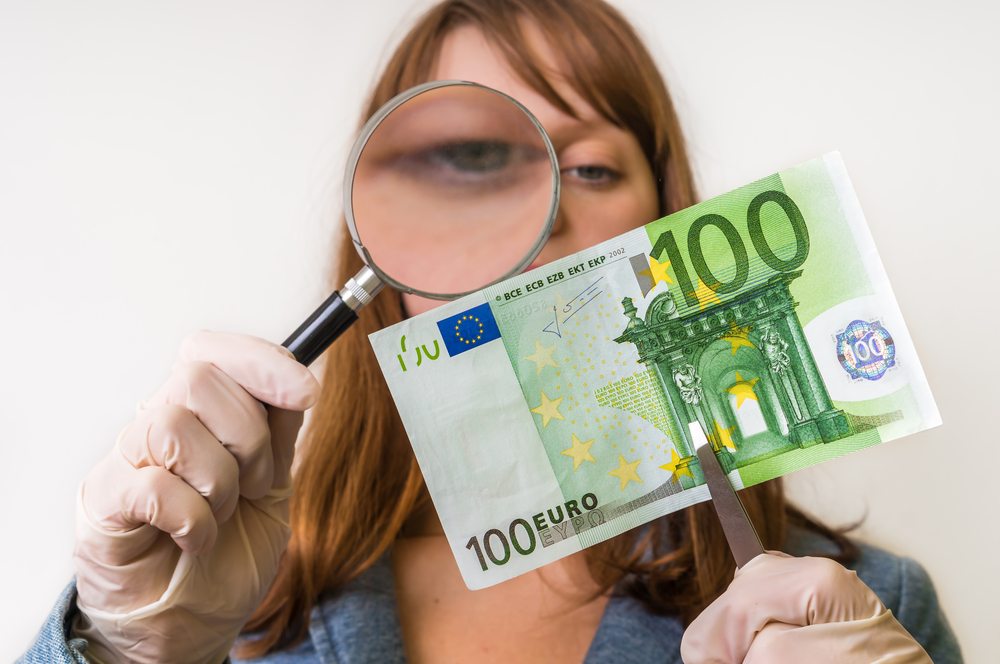 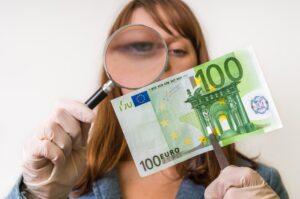 Fighting crime today involves the use of numerous impressive technological tools, from DNA analysis and CCTV footage to highly specialized cyber techniques.  While impressive forms of technology are likely to continue to play a large part in detecting criminal activities, “low tech” means remain useful.  One such area is in the detection of counterfeit money. Low tech ways of detecting counterfeit bills can make a difference between a store worker accepting cash and refusing it, in spite of some of the extremely sophisticated the techniques that were used to create the counterfeit bills.

In the US, some of the ways that are used to check the cash for authenticity include: Checking to see if the serial numbers are the same color as the Treasury seal; Running a finger along the bottom of the note, as genuine US notes have slightly raised printing  which can be felt when a finger is run along it. A fake note may also be slightly off-color, may look a little washed out, or the wrong shade of green. Comparing the bill to others can help to highlight the authenticity, or lack thereof. Another way to check bills for authenticity includes using counterfeit pens. Pens such as these can leave a blue or black mark on the bill if the bill is fake, or a yellow mark if it is genuine. Finally, thanks to the use of color-shifting ink, recipients of $20 bills for example may wish to check the number 20 in the lower right hand corner of the note, to watch it change from a copper color to green.

Ronald Noble, founder of RKN Global, urges anyone who handles money on a daily basis, especially in a business context, to be aware of some of the tell-tale differences between fake and genuine bills.

While many businesses and their employees work hard to ensure they never accept fake cash, the counterfeit industry has been estimated at more than $156 million in 2013 in the United States alone. With an estimated 1.2 trillion dollars of bills in circulation in the U.S. alone, it would be impossible to check every single bill for authenticity. In spite of the widespread use of credit cards and even cell phones to make payments, demand for paper bills continues to grow.

But it’s not just the United States that has a problem with fake currency.  The Royal Mint, which produces currency for the United Kingdom, recently released a new £1 coin that is thought to be the most secure coin in the world. The newly released coin has 12 sides, a hologram-like image, and a security feature that is hidden and thought to help protect the coin from being counterfeited in the future. As the UK prepares to welcome a new £10 note in late 2017 which is considered to be more resilient against counterfeiting, the fake note and coin industry will undoubtedly struggle to keep up with the changes.

New ways and means are frequently introduced to help fake cash stay out of circulation. One way to ensure that counterfeit bills and coins are taken out of circulation could involve all cashiers at every retail store checking the money that they are given. Such massive compliance in the context of busy retail establishments seems highly unlikely, though, because of the time involved and the potential offense to customers.

RKN Global’s founder, Ronald K. Noble, suggests that businesses try to stem the loss caused by the passing of counterfeit bills by being proactive about looking for them.

The U. S. Secret Service, which plays a major role in efforts to prevent and investigate counterfeiting, works to ensure that counterfeiters are targeted, and their distribution systems are detected. In its 2015 annual report, the U.S Secret Service stated that it seized an impressive $58 million in counterfeit currency. As the fight continues, it’s up to individual business owners and their employees to do what they can to say “no” to counterfeit bills, and report incidences to the relevant authorities.